Posted on May 15, 2019 by Tourism HR Canada
(seasonally unadjusted)

With the exception of the Food & Beverage Services and Transportation industries, all tourism industry groups reported lower unemployment rates than the same month last year (Table 1).

On a provincial basis, tourism unemployment rates ranged from 3.8% in British Columbia to 12.5% in Prince Edward Island.

The seasonally unadjusted unemployment rates for tourism in each province, with the exception of Nova Scotia, Quebec, Manitoba, and Saskatchewan, were below the rates reported for the provincial economy (Figure 1).

Tourism employment comprised 11% of the total Canadian labour force for the month of April. 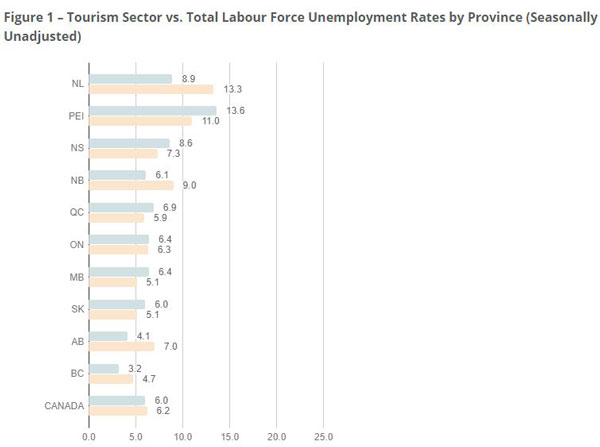 ² As defined by the Canadian Tourism Satellite Account. The NAICS industries included in the tourism sector are those that would cease to exist or operate at a significantly reduced level of activity as a direct result of an absence of tourism. Source: Statistics Canada Labour Force Survey, customized tabulations. Based on data for the week ending April 20, 2019.